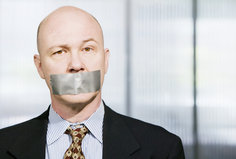 The vast majority of significant personal injury settlement offers come with a catch – the defendant wants a confidentiality clause included in the settlement agreement, barring the plaintiff and his or her attorneys from publicly discussing the facts of the case or terms of the settlement.In exchange for keeping their “mouths shut”, plaintiffs often benefit by obtaining higher compensation.  In many circumstances, the plaintiffs also have a preference for maintaining their own privacy.

Why do the defendants’ attorneys routinely insist on confidentiality clauses in their settlement agreements? Typically, defendants – and their attorneys – want to prevent evidence, such as witnesses or documents, from being accessible to future plaintiffs. In the grand scheme of things, this makes the defendant less accountable for its conduct.

Arguably, our legal system and the overall population would benefit from an outright rejection of confidential settlement agreements. Yet, most plaintiffs’ lawyers quickly capitulate; a settlement in hand is a sure thing, prevents future expenses necessary to bring a case to trial, and avoids the uncertainty regarding how much a jury might award in damages. Plaintiffs typically agree to maintain secrecy, as well. Seriously injured victims and their family members may be struggling financially and emotionally, and have a strong desire to put the matter behind them. It is understandable that they focus on their own needs and recovery, rather than how it may impact future plaintiffs’ or the public’s access to information and evidence.

Some attorneys and ethicists believe that lawyers’ rules of professional conduct provide them with sufficient grounds to reject secrecy clauses. Most states’ ethical rules favor enabling the public to have a realistic understanding of which attorneys have expertise in cases involving certain circumstances or against particular defendants.

However, those same rules of professional conduct also require attorneys to act in the best interests of the client – which often means agreeing to a speedy or generous settlement offer. Some legal ethicists suggest addressing confidentiality upfront, at the beginning of settlement negotiations. However, this approach may reduce the amount of a future settlement offer, or cause the defendant to take settlement off the table entirely. This risk, too, must be discussed with and agreed to by the client.

Furthermore, in this type of situation, the risk is borne by the plaintiff but the benefits are only realized by the general public, as mentioned above, or the lawyer who later enjoys “bragging rights” when he would otherwise be muzzled. It can be a tough sell, and one fraught with its own ethical implications. In the end, only the client can decide what is best for his or her situation. Some will agree to the risk “for the greater good” while others must do what is best for them and their families.

HOW ARE PERSONAL INJURY AWARDS TAXED BY IRS?

Factors to Consider Before Bankruptcy